My mother Sheila Cruthers had a soft spot for young women artists and rarely missed an exhibition showcasing a new artist. If she responded to the artist and her work, a purchase often followed – the Cruthers Collection of Women’s Art has many such works bought after Sheila returned to Perth from New York in late 1989. Several times it was the artist’s first significant sale. With Sheila in mind, I try to view as many exhibitions as possible by young artists when visiting Perth. Last week I saw Pure Contemplation Without Knowledge 9, a survey exhibition of new work from early stage and mid career women artists based in Western Australia. It was a very impressive show with compelling works by several artists – and I could definitely feel the presence of Sheila urging me to support one or more of these young artists by buying an artwork.

Large survey exhibitions of the work of younger artists are often a mixed bag. Usually programmed by state galleries or university art museums, they run every year or biannually – Perspecta at the Art Gallery of NSW (1981-1999), the Adelaide Biennale at the Art Gallery of SA (1990, ongoing) or more recently The National, straddling three heavyweight Sydney art museums (2017, 2019 and 2021). The artists and works included represent the tastes of the curator/s involved and the up-and-coming artists they favour or who are currently receiving institutional support. Perhaps because of this they can be tame affairs, with everyone on their best behaviour well behaved and eager to please.

So it’s interesting to see a different approach to selecting and presenting the work of young artists. Pure Contemplation Without Knowledge 2017 (PCWK) is the ninth incarnation of this exhibition, staged annually at Ron Nyisztor Studio in Perth, and it is the opposite of tame. In fact one artist exhibiting described the participating artists as “fierce women”, which is not a bad description of many of the artists and their fearless approach.

For those outside Perth, Ron Nyisztor (pronounced Nistor) is a mid career Perth artist who, in the mid 2000s, persuaded Melville City Council to allow him to turn their decommissioned library into an art gallery and studios. After a minor renovation the gallery and studios opened in 2006. Ron describes the gallery as a hybrid of an Artist Run Initiative and a personal project. In the words of Perth artist/curator Andre Lipscombe: “(Ron) has cultivated a successful studio/gallery enterprise that provides for (him) and his branch of creative comrades – artists, collectors, collaborators and curators – both professional and personal sustenance…bringing together what Ron terms his ideal studio with a broadening network of supporters through an annual exhibition program of his own making.”[1].

Given the dwindling number of commercial galleries in Perth, RNS has provided an invaluable venue for mid career artists to showcase new bodies of work. It also runs two annual group exhibitions – Scene and the young artist survey Pure Contemplation Without Knowledge. They are both curated by Ron, who is well connected with local artists and has an impressive eye for interesting and challenging work. The title started out as something of a joke, being pretentious and slightly pompous. But because in the end it didn’t mean anything, it has been infinitely adaptable.

Version 9 of PCWK features the work of 19 young and mid career artists based in WA, all female. I noticed this immediately when the invitation hit my inbox – all-women shows in a non-feminist context are relatively rare. Asked about positive discrimination, Ron shook his head, suggesting he’d curated the artists he felt were making the most interesting work into a group that would create a cohesive exhibition. Neither does he select the works individually. He leaves it to each artist to choose a group from what they are working on. And if their work continues to develop, he often includes them in the following year’s exhibition.

The show looks impressive in the gallery space, which has an uncluttered 1960s feel with timber floors, white walls and a relatively high ceiling. Works by each artist are grouped into discrete areas to enable viewers to see the range of the artist’s practice. The media is diverse – painting and prints, sculpture, photography, video, installation and more.

The first work you encounter is by Carla Adams. Carla recently exhibited a series of uniformly sized perspex works at Turner Galleries that each featured a list of her internet searches for a single day – self portraits suggesting that what you search for might be who you are. The current work also looks to the internet for source material, this time the comments made by young men encountered on internet dating sites. The main series comprises six small portrait busts of such men, doll-like objects made from poly-cotton, sash cord, yarn, silk and in one case human hair. The name of each of the six is the work’s title, with a comment from each as the sub-title – 2 Damon (I wouldn’t even rape you) or 3 Paris (Don’t be greedy bitch. You’ll get what you’re given) or 4 Jai (How could someone who looks like you be so stuck up?). The use of materials from domestic craft and the slightly comical nature of the shrunken heads undercuts the shocking sexism of the subjects by reducing them to strange fetish objects. It’s as if they’ve been pickled in their own vitriol. 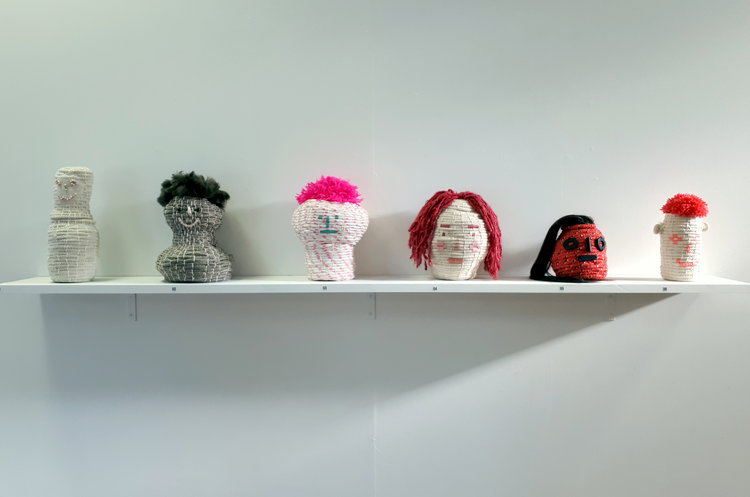 Carla Adams, Damon (I would not even rape you) 2017, polycord, cotton, merino wool, freshwater pearls, rose quartz and plastic, photograph by Ron Nyisztor, courtesy of the artist

The work of Grace Connors, a very recent graduate from Curtin University, engages with questions of social conditioning and the contemporary workplace. Hired as a ‘creative’ she periodically occupies a desk in a co-working space. House rules dictate every employee is allowed only one personal effect to personalise their desk during periods of occupancy. Most often, it’s a framed family photograph. In Wife Swap 2017 Connors takes one such item, a digital photo frame, and fills it not with family snaps, but placeholder images used to demonstrate the device in department stores – a continuous loop of happy, smiling families constructed in a studio, suggesting the social norms and relentless happiness to which we are expected to conform. In a text running as sub-titles beneath the rapidly changing images she speculates on what single thing she would choose to represent herself. It’s a smart and funny critique of alienated labour and contemporary work, running the length of a pop song.

It was Grace Connors who coined the term fierce women, and after seeing the short videos of Caroline McGrath it seems apt. A performance artist, McGrath’s videos feature herself facing the camera in medium close up. Usually heavily and theatrically made up, often as a child, she re-enacts deeply personal experiences of childhood trauma as a way of recovering power or agency. The work in PCWK9 is so intense as to be not easy to watch as McGrath regurgitates what looks like blood onto a sheet of glass hard up against the camera lens, her face squashed and smeared with blood. For the artist the work is clearly cathartic, but for the viewer it’s unsettling to realise the extent to which the artist is confronting and re-experiencing personal pain.

One of the senior artists in the show, Olga Cironis, was seen recently in the exhibition Sappers and Shrapnel: contemporary art and the art of the trenches, at the Art Gallery of South Australia. Following on from this work, her three pieces in PCWK9 explore ideas of conflict and war from different points of view and in different media. The large wall piece Deep 2017 creates a camouflage pattern by seamlessly assembling laser cut acrylic in several colours. It’s a finely controlled abstract composition which effortlessly anchores one wall. Its more distant and mediated relationship to the subject of war made it for me her most successful piece.

Photography by rural artist Lee Harrop showed a strong art historical grasp as, inspired by Paul Nash’s bitterly ironic World War 1 masterpiece We are making a new world, she used a range of optical devices to construct a non-naturalistic, almost theatrical scene based on a contemporary mining landscape. Also employing photography, Lynnette Voevodin produced a kind of altarpiece in which large scale early morning suburban vistas flanked an unsettling image of the entrance to a nightclub or strip joint. Vovoedin remains one of Perth’s most unpredictable artists, turning her hand recently to animation, photography, painting and her first love, performance. Gemma Weston’s work explores the artistic persona of a young girl growing up in the 1980s, who draws and makes installations from everyday craft shop objects like stickers, beads and ribbons. Titles like Amulet for the displacement of anxietyand Rosette for the sublimation of bitterness suggest an older person looking back on the social anxieties that may have confronted her younger self.

Possibly because I don’t live in Perth, this exhibition included several artists who were discoveries to me, within the context of a democratic survey of local artistic practice. I suspect it’s the  curator who has facilitated this approach, making Ron Nyisztor Studio a kind of “safe space” in which artists feel confident to show provocative work and take more risks than they could in a commercial context. Like some home galleries and ARIs, it’s a discovery space that artists, curators and adventurous collectors should visit regularly for their fix of the real thing. And as a result, Perth’s fierce women do not disappoint.